Since 2011 Canadian's have been able to receive digital TV signals over the air with an antenna. These transmissions are often in HD and are 100% free of subscription costs - i.e. once you have purchased the antenna and cable there is no additional cost to receive programming. Channel availability varies greatly region by region. scroll down for an estimate of the TV channels available to South Vancouver Island.

A History of Television Technology

Back in the 1950's and 60's the only way to receive television programming was with an antenna. In the early days of TV there were only 12 channels: 2 through 13 and all were on VHF frequencies requiring relatively large antennas for reliable reception. As the popularity of TV increased, however, the FCC in the US became inundated with license requests and it became clear that 13 channels would not be sufficient. The FCC's solution was to allocate additional frequencies in the UHF band. Broadcast television was initially allocated UHF channels 14 through 83, but when cellular telephones became popular channels 69 through 83 were taken away from TV stations and re-allocated for cellular telephone service. 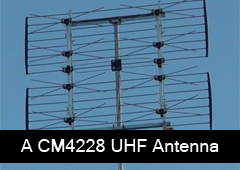 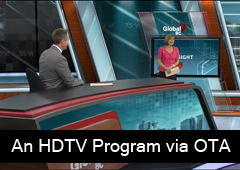 The first question that most people have is "what channels can I receive?" The answer varies greatly from region to region, but in general all basic, local channels should be available. If you reside in Canada then this means you should be receiving Global, CBC, CTV, CBC French (if available) and CTV2 (if available). If you reside in the United States then channels like ABC, NBC, CBS, PBS, and FOX should be available. In most regions there will be other local stations that you can receive as well. If you're lucky enough to live near the Canadian/US border then you will likely be able to receive broadcasters from both sides of the border.

If you watch a lot of programming on specialty networks like HBO, Discovery Channel, CNN, etc. then you may find that an over-the-air-only setup may not be for you, however many people have a basic cable/satellite subscription and augment the specialty channels with high quality, high definition programming available for free with an antenna.

The basic equipment requirements for over the air reception are pretty simple: 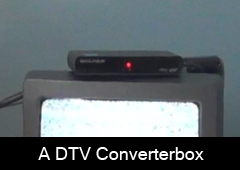 If you live in Southern Vancouver Island I have compiled a list of stations you can expect to receive: